The Origin of 20 Sleeps West 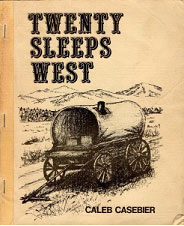 It was winter in Hominy, Oklahoma and an old Pawnee Indian sat on the sunny side of his lodge, amusing a group of boys by drawing foot prints of animals in the dust. Ed Casebier and one of his brothers stood by, watching the Indian skillfully draw replicas of game animals foreign to Oklahoma, including huge bear tracks and mountain lion. They believed the Pawnee had seen tracks of this nature somewhere else. It was a chilly day and the old Pawnee pulled a blanket closer around his shoulders and rose stiffly to enter his tent. Ed took this opportunity to casually ask the Indian where he saw the big tracks. The Indian, without changing facial expressions, hesitated a bit and then waved his hand toward the west.

Ed thought for a moment, then again asked the Indian,“How many suns?” The Pawnee slowly opened and shut his hand four times, which Ed understood as twenty. The Indian started again to go in his teepee, but hesitated and in broken English with a guttural voice said slowly, “High mountain, big water, good hunt, ride good pony---maybe twenty sleeps.” He pulled his blanket closely around his shoulders and pointed a wrinkled and weathered hand westward and said, “Twenty sleeps west---twenty sleeps west.” In 1912, Ed, now in his twenties with a wife and young son, left the heat and drought of the Oklahoma flatland and headed west to Colorado. When they arrived in the Uncompahgre Valley, they were completely overtaken by the vista of this new beautiful country. The enchanting mountains encircled the valley like a jagged irregular rim of a huge bowl and everywhere they looked canals ran full with water. Crops of grain, alfalfa and potatoes were growing luxuriously. Ed’s mind couldn’t help but wander back to when he was a boy and the old Pawnee Indian. The young family was so enamored by the abundance this new country afforded that in 1913 they made their homestead on the Transfer Road where they envisioned as Twenty Sleeps West.

Debi Harmon, Broker/Owner of 20 Sleeps West Real Estate is married to Mark Harmon. Mark is the son of Janyce Casebier Harmon, grandson of the author, Caleb Casebier, great-grandson of Ed Casebier. Debi’s extended family have built deep roots in the Uncompahgre Valley this past 100 years and Debi and her office would like to welcome you to the land of “ high mountain, big water, and good hunt”.